Having open taps is great, but let’s say there is a reason you may want to prevent someone from helping themselves to your tasty beer while you are not around, what do you do?

You might be wondering if you can lock your beer taps?

Yes, you can lock your tap beer using a lock and key tap lock system specially designed to attach to your faucet without damaging it.

There are many reasons why you might want to have a lock on your beer tap, obviously to stop someone who shouldn’t be in there is one of them.

And finding out the hard way that my toddler can reach up and pull the beer tap out of curiosity, leaves a big mess!

Cats have also been known to move the lever just enough to drip all night on the floor!

You can manually create a beer tap locking system using tap locks.  And if you want extra security you can also use an inline beer shut-off valve.

You could just use the inline shut-off valve, but if you don’t have a lock to your kegs, someone can access the valve and turn it back on.

What I like about the beer locks is that you can see that they are locked and that right there is a warning of its own that you shouldn’t even try to pour it.

Each beer line will need its own lock and key the same goes for if you want to use the inline shut-off valve. 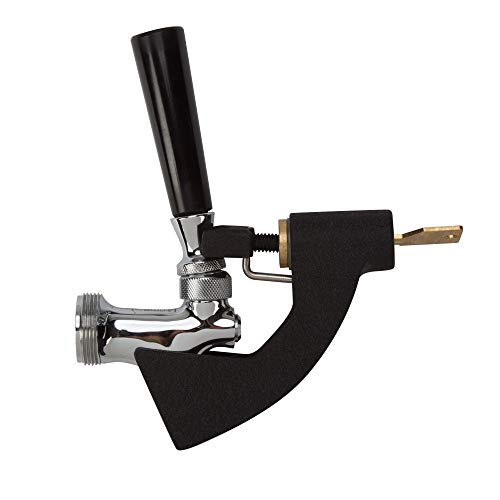 Prices pulled from the Amazon Product Advertising API on:

Product prices and availability are accurate as of the date/time indicated and are subject to change. Any price and availability information displayed on [relevant Amazon Site(s), as applicable] at the time of purchase will apply to the purchase of this product.

Additionally, you could get security cameras or beer monitoring systems like the kegtron smart keg monitor that you can use wirelessly.

Having open taps is excellent, but let’s say there is a reason you may want to prevent someone from helping themselves to your tasty beer while you are not around; what do you do?

For those who can’t fathom the idea of having a tap without being able to pull on it whenever they want, or perhaps there are children in the house who also like a drink now and again, fortunately, there are solutions.

Can I lock my beer tap?

Now, if you were wondering whether or not someone can lock their beer tap spout with something suitable – then yes – yes, you can!

There are several options for locking your beer tap spout, ranging from simple to more complex solutions.

What can I use to lock my beer tap?

The good news is that there are quite a few options available for those who want or need to be able to prevent their taps from being used by others, so let’s have a quick look at four examples you may come across:

These simple fixings allow users to lock their taps in place by simply tightening up a small bolt which prevents the handle from being pulled forward and therefore preventing needless drinking.

Here is a solution from Draft Beer Taps UK, a company specializing in locking beer taps for pubs, bars, and home brewers who want to ensure their beer tap cannot be used by others when they are not around.

The device allows the spout to lock into place while at the same time allowing you to pull/push on it if needed while preventing it from being pulled forward, so it will not allow access to your beer without a key.

The cost of these locks varies depending on where you get them from but do bear in mind that this may not fit all types of taps.

Another option is to use a “lock nut,” which slides onto the bottom of your beer faucet and prevents others from pulling on it.

Finally – another option is to use a chrome tap lock such as those found here, which will prevent the handle from pulling forward. This option costs around $15 for a set of two locks and does not need any specific fitting for a snug fit.

Now that we have looked at some solutions for locking your beer tap spout, let’s look at an example of how each solution might be utilized:

the first tap can be locked in place by tightening the bolt so no one can access it without a key.

The second tap is locked using a lock nut, which allows you to pull/push even though the fixture cannot be removed forward.

The third tap is also locked using the chrome-type tap lock, which will prevent anyone from accessing it without a key.

The fourth option here is not an actual beer faucet but rather a nozzle of sorts that can easily be locked in place on your standard kitchen mixer or washing machine taps by screwing on the appropriate fitting.

This prevents others from turning them on and helps to ensure children are safe around water.

Of course, there are some caveats about this particular solution depending on where you live, as some places require mixer taps to have “lever handles” due to the risk of scalding, while others do allow them. In contrast, some states and countries require all washing machine taps fitted with child safety locks. So, again – make sure you know what is needed in terms of local legislation before doing this!

Finally, you could buy a cheap ball valve tap that allows you to turn on/off water flow entirely by turning the handle one way or another, negating any need for someone else to pull on your beer spout (close the ball valve when you are not using it).

Of course, this simple fix does mean that if there is an issue with your plumbing that leads to no water coming through the faucet, then you will not be able to

How does a beer tap lock work?

Some locks will fit onto most standard draft beer faucets and secure them from being opened by anyone who should not be enjoying a drink.

This works because the lock screws onto your beer tap nozzle from underneath, and it fits most types of taps as long as you have a draft system with a removable spout.

What are some of the benefits?

So there are some great benefits for having one of these locks fitted onto your beer tap if you want to keep it secure:

So there we have it – with one of these locks fitted on your beer tap spout, you never need to worry again about having to go hunting for your keys at closing time when you want another beer!

Thank you for reading.

Please feel free to leave a comment below. Your feedback/experiences are appreciated and welcomed. If you have a topic you would like me to research and write about – please leave that in the comments section as well. I will do my best to answer any questions posted below as quickly as possible.