When I think about home brewing, I get that feeling of making something magical.  Brewing beer is just that, it is magic, well maybe more like science, but.

You boil some ingredients, add some yeast, and in a few weeks, you have a beer with alcohol!

I first heard that beer was brewed at the white house, I thought, oh yeah that makes sense.

The white house has been around for 228 years now, the presidents must’ve thought about brewing some ale up, especially during the really early years.

But actually, there has only been one president to brew beer at the white house

The first president to brew beer in the white house was Barack Obama.

Homebrewing as a hobby was growing quickly, from brewing in your basement to your garage, President Obama thought it would be a great idea to join that community of brewers and brew beer in the white house.

So he bought the equipment, just like the kits that are sold at your supply store, and had his chefs put together two styles of beers.

Obama brewed a Honey Ale and Honey Porter style beer.  The honey was gathered from the white house beehives as well!  (President Obama was also the first to have his own bees.)

Barack Obama decided to buy a homebrew kit, using his own money and not the taxpayers, which I can see why that last bit of information is important to note. 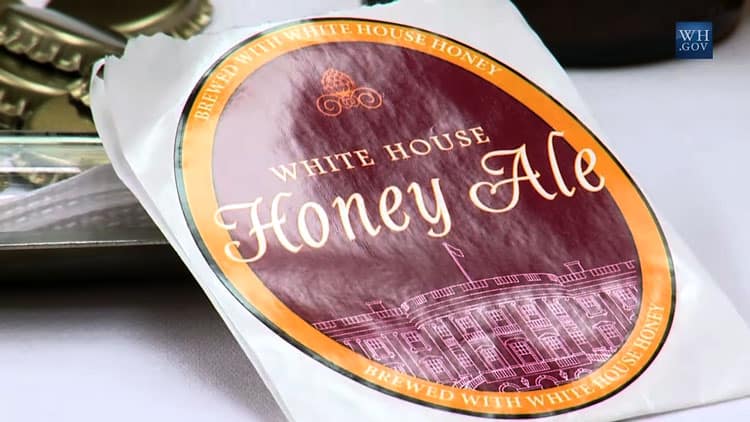 Where in the white house did they brew?

They brewed in the white house kitchen.  Using larger stock pots to boil the beer.

The beer was fermented in a cellar below the kitchen.  Likely because it was out of the way and cellars are the perfect place to ferment the beer with it being dark and cool temperatures.

The total time it took to before the beer was reading to drink at the white house is around 6 weeks.

The beer was served in bottles.

How much beer did they brew in the White House?

That fact isn’t known, but at least 4 batches which the Chef mentions in an article.  How much did they brew since then, well maybe that information will be revealed in the Obama memoir.

George Washington had a whiskey distillery and also brewed beer at Mt.Vernon

Thomas Jefferson grew grapes and made wine at Monticello.

President Obama was the first to actually buy a homebrew kit and brew the beer at the White House.

What type of beer kit did Obama buy?

The type of beer kits that was used is very common.  Usually, it contains 5-6 gallon buckets with lids to ferment the beer.  A glass carboy and bottling equipment.

The White House kitchen was fully stocked with all the pots needed and tubs to wash and sanitize everything.