I never imagined there could be anything more satisfying and fulfilling as making your own beer at home until I decided to put that brewed beer into a keg and serve it on tap in my basement.

Bottled homebrew is good, but tap beer is just better!  And the feeling of putting a glass underneath the faucet and pouring that beer is such a gratifying moment, for many reasons.  You brewed, you poured!

Kegging is really much simpler of a process and much easier to clean than bottling beer.  A 5-gallon batch usually yields around 48 12 ounce bottles.  Each of those bottles needs to be cleaned and sanitized before you can reuse them.

A keg is just one bigger container, and that means you just need to clean one of them and that is much more manageable.

Most importantly, you can drink your fresh home-brewed quicker than letting it condition in bottles.

What do I need to keg my homebrew?

To have beer on tap you will need the following items for the system to work properly:

The equipment to start kegging is an investment, but can pay for its self over time, if you include your time involved in cleaning all those bottles vs one keg, that’s worth it right there! 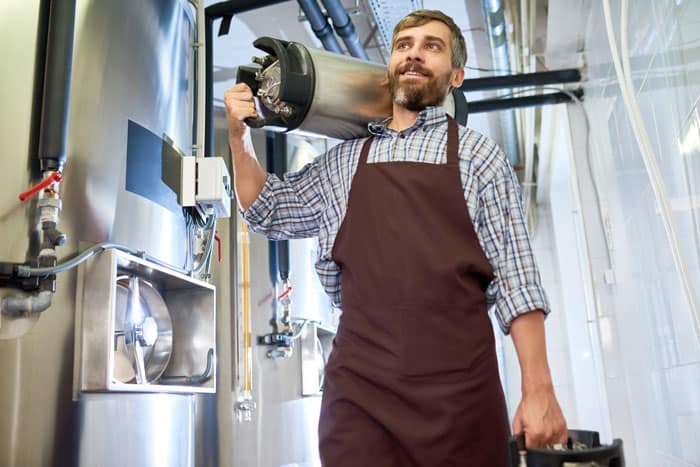 How much does it cost to start kegging?

You could start for around $150 buying all used, on craigslist for example.  But if you prefer new, there are kits that start around $250.

Corny kegs are usually used soda kegs, but they do make newer ones that cost twice as much as a used keg.  I have used corny kegs for years and I love them.

As far as the other pieces of equipment, buying used is fine, but I would be more cautious about buying a used faucet of all the pieces of equipment listed above.  That’s because faucets have inner seals that could over time become worn, and you will have drips and leaks if you buy a faulty one.

The beverage or beer line you’ll want to buy brand new, I like to have fresh clean lines on a new system.

How long does homebrew last in a keg?

Kegged homebrew can last as long as 6 months and more under the right conditions.  The conditions would be, clean keg, Co2 pressure, and kept cool.

The chances are you will have drank that entire keg long before you have to worry about an expiration date.

It’s a very good thing to know, you can pre-plan your batches ahead of time.  Let’s say you want to make an Oktoberfest but it’s only June, I would say do that if you can keg and keep cool for the few months it will sit.

Do you have to keep a keg of beer cold?

A keg of beer can be held in a cool dark place, like your basement for general storage purposes.

But homebrew needs to be cold in order for the C02 to blend in the liquid and complete the carbonation process.

Also, most beer is enjoyable when colder, so having a cold beer on tap is a good idea.

What type of keg for homebrew?

A Cornelious or “corny” keg is preferred by homebrewers because they are cheap and easy to fill easy to clean and they hold 5 gallons.

You can buy these used for around $50-60 dollars online or at your local brew supply store.

The corny keg is a tall slim keg (Dimensions:23″ x 9″), which makes storing in a keezer or kegerator easy.  They have handles and weigh 10 pounds when empty or 55 pounds when full.

The top of the corny keg has a wide opening for filling and cleaning.  It has airtight seal access.

There are two different fitting-setups you can get, pin lock or ball lock, I find the pin lock to work the best.

What does a CO2 regulator do?

CO2 and kegs are separate, and you need these two things to make your kegerator work and your beer to have carbonation, for taste.

On your corny keg, there is an in and out valve, one is for the carbonation and the other is for distribution.

On other kegs, you will use a coupler and it will be the same thing, a line-in for the CO2 and a line out for the beer flow.

The regulator will screw into the CO2 tank and from there it will control the pressure that comes out and ultimately how much pressure you give to the keg.

Most kegs will use 5-10lbs of pressure to have a nice pour.  The regulator can be adjusted in case it’s not enough pressure or if it is too much and you are just pouring foam.

Is it cheaper to buy or build a Kegerator?

Yes, it is cheaper to build a kegerator than it is to buy one.  This is because there are many “hacks” or way’s to convert your old refrigerator or dorm fridge into a working kegerator.

A popular kegerator conversion uses a chest freezer and is called a ‘keezer‘ when it is all built.

In many cases, people are giving away old refrigerators and chest freezers.  This is probably the best way to keep your cost down and to experiment with building one.

How many kegs can fit into a kegerator?

Let’s assume you are using the 5-gallon corny keg’s and you have the smallest chest freezer, you can fit 3-4 kegs in it.

The bigger obviously the more kegs you can fit in there.

And another thing to keep in mind is that you can use larger store-bought kegs, like 1/2 barrel for sure.  The sky is the limit when it comes to kegging beer!

How do you pour beer out of a keg?

You need to use some sort of tap faucet, whether you mount a solid steel tap or you use the plastic squeeze trigger faucet like the kind we used at high school keg parties.

If you use the trigger and plactic hose, it connects straight to the keg and easily stay’s inside the kegerator.  It works, but not as great as a mounted one.

The mounted tap faucets come in many differnt styles.  There are standard ones which are super affordable and then there are some that can help control the flow of your beer, and those can cost over $50 each.

So if you are putting together a 4 keg system, these can add up, but you can go cheap in the beginning.

I have had some drip issues with cheap taps, and some that get sticky or stuck if they haven’t been used in a while.

Can you have multiple kegs on one co2 tank?

You can have multiple kegs that run off of one CO2 tank by either making a chain of regulators or using the more common air distributor manifold.

This is an affordable way to distribute the CO2 to all the kegs, add as many as you like.

The good news is, you can add CO2 to them all, the downside is some different kinds of beer may require different pressure levels which could make some beers less or more foamy.

How to keg your homebrewed beer?

Now that we have a rundown of what we need and how to set up, let’s go over how to keg your homebrew.

Just like brewing beer, we are going to want to be as sanitary and clean as possible.

That includes all pieces of the keg, the lid, transfer tubes, and utensils.  Make sure they are cleaned and sanitized before using.

The beer is done fermenting and now it’s time to transfer to a keg.  Have a good plan in place before removing and exposes the beer to air.  You’ll want to be ready and quick to not compromise the fresh brew.

Transfer from the secondary to the keg, I like to siphon while trying not to get any sediment in the keg.

Add the sanitized lid and gasket back to the keg and seal it up.

Add C02 immediately and purge the air out, do this a couple of times to make sure the oxygen is out of the keg.

Now we want to refrigerate the keg for a couple of hours before trying to fully carbonate, that is because the gas works better when the liquid is cold.  It’s better to not waste the CO2 this way.

You can learn about force carbonating your keg here, but if you’re not in a hurry you can add about 10-12 psi overnight and that should be close to ready the next night.  If not, turn up the psi a little higher and wait a few more hours.

When it’s ready you likely need to adjust the pressure by letting some of the CO2 out and adjusting the regulator to find the perfect pour.